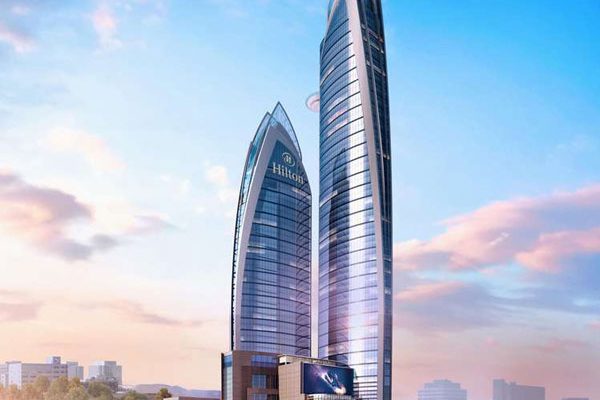 Real estate developers Jabavu Village Limited and White Lotus Projects are the names behind plans to build Nairobi’s tallest building, which will be the new home of the city’s Hilton Hotel.

The Sh11 billion twin towers building, whose construction has begun in Nairobi’s Upper Hill, is scheduled to be completed by 2020.
Developers of the property were thrown into the limelight earlier in the week when Hilton Worldwide announced that it would be setting up its third shop under a franchise agreement with its owners.

When complete, Hass Towers will be one of the largest and most modern properties in Nairobi’s Upper Hill area and will be located about 200 metres from The Montave – another upmarket mixed development.

property financed by Dubai investors. Both are expected to reaffirm Nairobi’s position as Africa’s prime real estate investment city. The 67- storey Hass Towers is set on a three-acre plot and will dwarf other buildings in Nairobi, including the 43-storey complex that Chinese firm Avic is building in Westlands and the recently completed UAP Towers.

The 255 guest-room hotel will be located in the shorter of the twin towers while the taller arm will be an office block.
The mixed use development consists of a business hub and a four level basement car parking facility with automated car parking solutions.
It will also house a four level retail and entertainment segment with a central atrium on which the 45 level five-star suite hotel will be built.

Hilton hopes to tap into the large number of local and international visitors to Upper Hill area, which has rapidly evolved into Nairobi’s business hub and the preferred location for diplomatic missions. “The property will pierce the skyline of Upper Hill and will be well placed to meet the growing demand for quality living in one of Nairobi’s most exciting locations,” said Patrick Fitzgibbon, senior vice president, development, EMEA, Hilton Worldwide.

The Upper Hill hotel will be Hilton’s third in Kenya besides the pioneer one in Nairobi’s Central Business District that was opened in 1969 and the Hilton Garden Inn located two kilometers from the Jomo Kenyatta International Airport.

Hilton’s decision to upgrade its presence in Kenya with a modern facility is seen as being part of the ongoing battle for control of Kenya’s growing hospitality industry. “Occupancy rates in Nairobi and Mombasa remain high and international companies such as Marriott, Sheraton, Ramada, Hilton Garden Inn, Mövenpick Hotel and Four Points by Sheraton are planning new hotels in Kenya in the next five years,” PricewaterhouseCoopers (PwC) said in a Hotels Outlook report released last month.

The Business Daily has learnt that Hass Petroleum Group is among the investors associated with the twin tower that is currently under construction.
The petroleum retailer has a significant stake in White Lotus Projects, which is a co-developer of the Upper Hill property whose cost is estimated at Sh11 billion.

Hass Petroleum country manager Abdirizak Ahmed confirmed that his company is part of the project but did not divulge any further information.
Global engineering group Meinhardt Group is the lead engineering and structural services provider for the property whose construction is expected to last four years.

Nebraska based White Lotus Group however said it was difficult to put an overall price on the project that will include Africa’s tallest tower.
“Site excavation was 80 per cent complete as of October 5 and will pave the way for subsequent works. The project cost is pending the contract award to the General Contractor,” White Lotus said in a statement.

“We are not looking to borrow. The project is wholly owned and funded by White Lotus and Jabavu,” the American developer said.
Regulatory filings with National Environmental Management Authority show that Jabavu Village had initially intended to develop the commercial building tower alone at a lower scale.